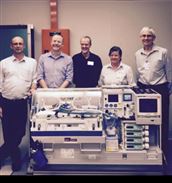 An exciting innovation at NETS has been the in-house development of world's best technology in the transport of newborns and young infants. Pioneered by our biomedical team (headed by Mr Frank Kastrounis), this equipment is recognised across the country and around the world as being at the cutting edige of innovation, effectiveness and safety.
The latest development is a series of systems designed in 2012 which are now available in Sydney, Canberra and Newcastle to assist in moving babies. The photograph shows the launch of one of these systems for NETS Hunter at the John Hunter Children's Hospital.
To quote one father "I could not fathom how they could get my desperately ill son, who was needing resuscitation every 20 minutes from one hospital to the next? Then the team and the system arrived and it all made sense - mobile intensive care" Ziad Bazzi.

Another innovation is Vision for Life (VFL), form of telemedicine which was conceived by Dr Andrew Berry whilst travelling in the outback on one of the many Variety Bashes. Unlike unwieldy systems of 'video conferencing' where the technology is so often a barrier to prompt and effective communication, VFL is a 'video-streaming' concept which is simple, effective and easily incorporated into the work flow of an emergency case. With the generous financial assistance of Variety, the Children's Charity and the endorsement and support of the Ministry of Health NETS has rolled this technology into large numbers of hospitals over the past year following initial trials and system design by a Ministry-funded project team led initially Mr Michael Broadbent and later Mr Kelly Shadid. VFL has really revolutionised the way we triage calls and make better, safer decisions for children. Supplementing existing regional systems across the state that NETS has negotiated access to, NETS can now see the patient being described by telephone in 145 hospitals where there are 220 cameras over resuscitation beds in Emergency departments, neonatal nurseries and children's wards. These allow the NETS consultant and team vision of the infant or child within minutes of the call for help.